I'm Dayid. I've run dayid.org for years now. It simply follows my interests, and where proper - gathers information like a tar-filled tumbleweed. This changes with time, but has focused on computer programming, do-it-yourself, carpentry, autos, firearms, fishing, cooking, and other such things. 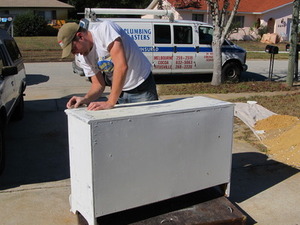 My wife's grandfather passed away in 2008. In 2018 while taking down a tree on his property, we found this axe-head. My wife's father asked if I could "clean it up a little, but leave some character". This is what we started with:

After some electrolytic rust removal I still had to to take a wire brush to clean it out. I chose an axe handle for its "character" (it's got heartwood and the grain is not ideal for a used-axe, but for a mantle-piece it looks nice). It was then re-painted in the original Council Tool red with angled slash. Also made a leather sheath/edge guard for it. Did leave some of the mushrooming on the back to "keep its character" per Michael's request. The "OM" wood-burned here is the original owner (Michael's father)'s initials.